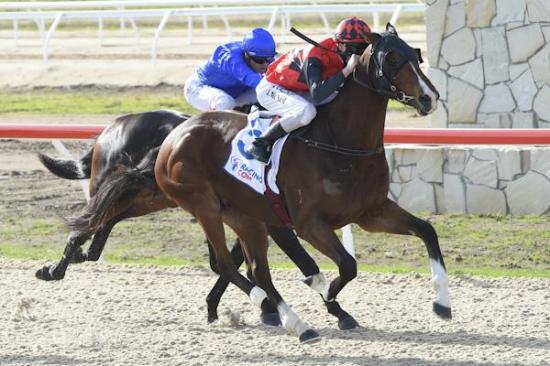 Flying Geepee continued the stable's great run with juveniles this season when breaking his maiden in strong fashion at Pakenham on Sunday.

A horse who has always shown good ability, the bay has however taken a little while to figure things out - his first win coming at his sixth start.

At times inclined to over-race, Flying Geepee has however always fought on and with the right run on Sunday he was just too strong - saluting by a length with plenty in hand.

"He got a bit of cover today which helped him settle," Jade Matthews said.

"He has been a bit fierce in his races - he just needs to learn how to flatten himself out and to it properly."

"Even in the races where he has pulled he has held on well, he tries his hardest - he has the fight to do it, he just needs to learn."

Still green, wanting to drift out after joining the lead with 200m to go, Flying Geepee is a horse who will be all the bigger and stronger next time in.

"There was plenty of noise out there on the lawn when he won!" Matthews said.

A well related son of Flying Spur bred by Murray Thoroughbreds, the $40,000 Easter graduate is the first foal produced by Registered Nurse, a daughter of the dual Group winner Moon Queen - dam of the French stakes winners Beauty Parlor and The Brothers War.Moon Queen is a daughter of the Gr.1 winning Shirley Heights mare Infamy.