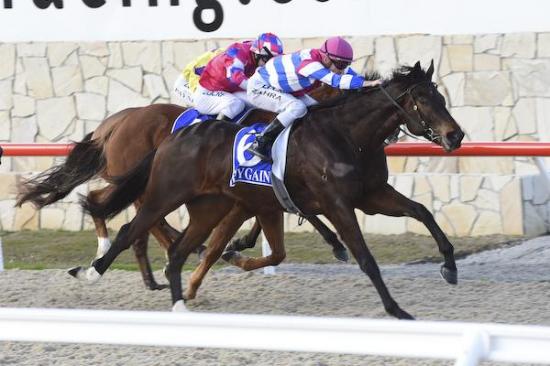 After our earlier runners on the Pakenham synthetic programme on Thursday found a bit of trouble it was a relief to see Megamind enjoy a trouble free run in the BM70 Handicap.

And didn't he find the line well, hooking out at the turn and finishing on strongly - racing a touch green over the final stages but getting the upper-hand late.

"He wanted to lay in a bit once he got to the front," reported jockey Mark Zahra, "but he was too good for them."

Well supported into favouritism, Megamind made his run early which worked out well with how the race was run.

"They had a breather at about the 700m," Reid Balfour noted, "and he popped out four wide which was probably the winning move."

"It enabled him to get him into a rhythm and he just kept going."

"It is good to see that he likes this track," he continued, "as there is obviously plenty of racing for him here over the winter months."

"And with the confidence he gained from today's win he can go on with it."