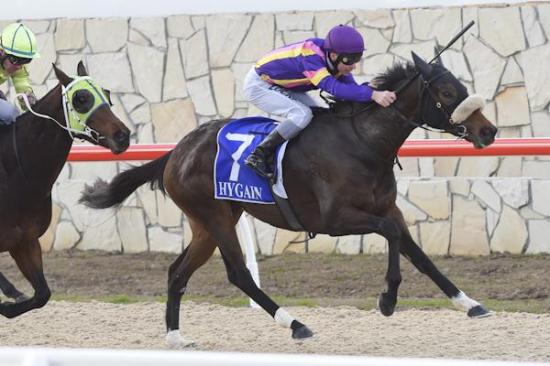 Having caught the eye with a strong finishing second at her Pakenham debut late last month, promising filly Darcy's Law was a warm favourite at that same track on Tuesday.

Doing her best work late after drifting back at her first start, Darcy's Law was right up on the pace this time - having learned plenty from her first start - and she travelled well along the rails for Ben Melham.

Challenged from the turn she looked for several strides as though she was going to run a gallant second but after being clearly headed she dug deep and fought back - putting her nose out right on the line.

"I was a bit concerned when she was right up," Jade Matthews admitting, noting that "I thought she might not quite know what to do being so exposed."

Which was the case, Darcy's Law "getting a bit lost" once in front but finding the line in the style of a horse with good natural talent - "she did it on ability."

Always well regarded, Darcy's Law is an improving type who Matthews says is "working it all out the more she races."

Ben Melham did not intend to have Darcy's Law up there, hoping to take a sit but not keen to drag her back as "once she landed there she was comfortable so I was happy."

Raced by Miller Thoroughbreds, the NZ$110,000 Karaka graduate is a daughter of the late High Chaparral (pictured) and the imported Red Ransom mare Whiffle.

A descendant of Mr Prospector and Seattle Slew's ancestress Frizette, Darcy's Law has as her fourth dam the champion Dahlia.