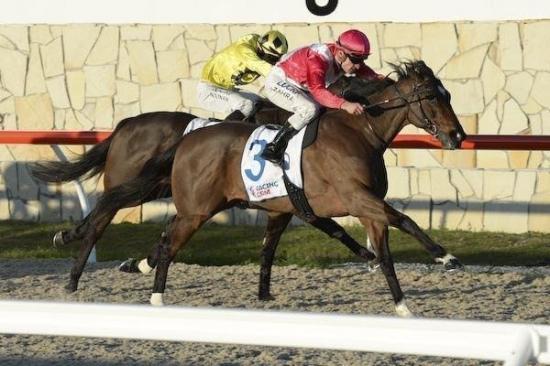 After a run of placings, Prix D'Or was terrific breaking through at Sandown in early January and on Wednesday at that same track he was able to go right on with the job - rising in class but winning even more impressively!

Given a lovely ride from an inside gate by Jye McNeil, the consistent five-year-old gained a split early in the straight and away he went - racing clear by 1 1/4 lengths to record the sixth success of his 25 start career.

Increasing his prize money tally to beyond $135,000, Prix D'Or was very game considering a seven day back up in demanding conditions.

"He did a good job giving the weather," Robbie Griffiths said, noting that the son of Redoute's Choice had backed up well as a young horse - "so we were quite confident that he would hold his form."

Taking time to mature into a racehorse, Prix D'Or has, at times been "a bit erratic."

"He can still get his head up in the air and get a bit keen but today he got the smother in the box seat and that is the right formula for him."

Whilst happy to see Prix D'Or excelling at the mile of late, Robbie is confident that he has scope to get over more ground - "I am not afraid to try him at 1800m and even 2000m at some stage, he has such a strong pedigree which will open things up for him at a later date."

Jye McNeil agreed - "he has been relaxing better in his races so he should be able to step up in distance."

Aboard for each of Prix D'Or's last two wins, Jye said "I am really getting along with this horse and his win today was better than last week's - he felt like he put them away more easily despite being left in front a fair way from home."