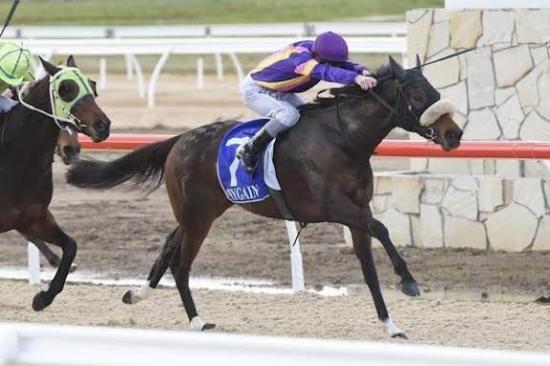 The sun was hot and so was our form, the stable cheering home an impressive running double at Sandown on Wednesday - Prix D'Or's victory followed up by an easy all the way win by Darcy's Law.

A touch unlucky when held up for runs at her previous outing at Moonee Valley, the High Chaparral mare was well fancied to atone and after jumping straight to the lead she didn't give supporters any cause for worry.

It was the third win - and the first at metropolitan level - for the lightly raced four-year-old who has, said Robbie Griffiths "taken a little while to mature."

"But she is getting the knack of it now. She is still a little bit eager, she has always been that way and that is very much the breed. But it doesn't affect her racing and she will get better at it as she goes along."

Whilst Darcy's Law was great in front, Robbie is confident that she will be able to win races ridden more quietly as well - "I don't think she will win all her races in the leading role but it suited today. I just left it up to Brad."

"I was happy when she pricked her ears, it was nice to see her relax. I think she will get out to 2000m, the question has just been when we do it as she has been immature but we will get her out to that distance range at some time."

Brad Rawiller was happy to make the most of Darcy's Law's good draw - "it was not the plan to lead but she was always going to be right on the speed. She got a nice run and toughed it out strongly."

Brad agreed with Robbie that Darcy's Law should continue to improve as she matures - "the better manners she gets the more ground she will get which will open some doors for her."

Purchased in New Zealand as a dual purpose prospect, Darcy's Law hails from a strong international family with her third dam being the super star race and broodmare Dahlia.

Her owner Austin Miller has been putting together a nice group of broodmares and Darcy's Law will be a nice addition to his band in the future.