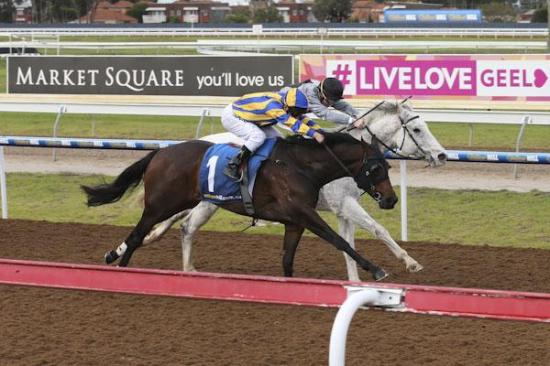 Having run so well at his first two starts it was no surprise that Bitten was sent out favourite at Geelong on Tuesday - and the three-year-old rewarded his supporters with a strong on pace victory.

Jumping fast to settle outside the leader, Bitten engaged in a two horse war down the straight but over the final stages was able to prove too strong.

"He is not a big horse so to see him stick to his task and get the job done was terrific," Robbie Griffiths said.

"He took a while to shake off the other horse," jockey Ryan Maloney reported, "but he found enough in the end."

Don Healy is looking forward to Bitten racing on, noting that the still inexperienced horse did not really have the race run to suit.

"It was a strange race, they were stopping and starting and for young horses that is always a bit difficult."

"He will go on and win better races."

A bargain $8000 Vobis Gold Yearling Sale purchase by Sharkbite, Bitten is raced by a large and enthusiastic group headed by Sharing Winners and Clanbrooke Racing.

He is the third foal and third winner for the two times winning Zabeel mare Clare Vista from the family of Flight Stakes winner Danarani.