Reason to be Proud 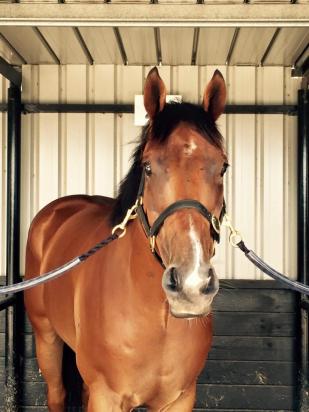 Geelong winner Moment Of Pride has been a work in progress and it was great to see him salute in such determined style on Wednesday.

Having his third run this time in, the son of Choisir settled just off midfield off a slightly slow start, pulling his way into the race from the 800m, getting off the rails and straightening three lengths off them.

Really letting down well, the lightly raced four-year-old was strong to the line, recording his second victory from just seven starts.


"It is nice for the owners who have been such great supporters of the stable," said Don Healy who is pleased the progress that Moment Of Pride has been making.

"He is such a big horse and it is hard to know where he will end up but he has certainly improved every run this time in. He can go up another rung on the ladder and be competitive again."

Jockey Andrew Mallyon, who was also aboard Moment Of Pride when he ran second at Echuca on December 31, was taken by the up-and-coming gelding's victory.

"He is a nice type, a big strong boy. The key with him is just to let him relax in the run. He is still a bit immature mentally but he switched off nicely today so I knew he'd have a kick left. I was really confident coming down the hill."

A home-bred for Murray Thoroughbreds, Moment Of Pride is out of the stakes placed city winning Fasliyev mare Bold Moment. Served last spring by Stryker, she is a daughter of the Matriarch Stakes winner Flushed.

Moment Of Pride was the second leg of our second double in two days so congrats to all our wonderful staff on a job well done!