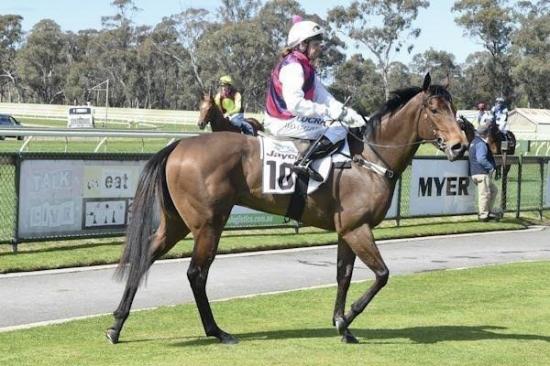 Expectations were high when speedy filly Scandimania resumed at Sale a couple of weeks ago, the three-year-old having been so impressive when saluting at her Bendigo debut last September.

Sent out favourite, Scandimania proved disappointing unplaced in a six horse field but it was simply a matter of conditions not suiting - the daughter of Magnus never happy on the slow track.

But it was a different story at Pakenham on Thursday afternoon, the bay much happier back on top of the ground and always travelling well for Matthew Allen in the 1000m BM64 contest.

Showing her usual dash to sit second, Scandimania always had the leader in her sights, chasing hard when her rival gave a kick at the turn. Joining the lead with 150m to go she was at her best over the very final stages, drawing clear to win by a soft 1 1/4 lengths.

"She just didn't handle the soft track first up so we just wiped that race off," said stable representative Beth Schroen. "Robbie has always had a good opinion of her and that was a pretty easy win today."

Allen agreed. "She has got ability this filly and I was pretty confident today. She stands very quietly in the gates and she was the first out. She had a soft run and she was always going to be hard to beat."

"She is only a little thing," he added, "but she is up with our better three-year-old fillies."

She is a daughter of Magnus and the lightly raced Bel Esprit mare Belleluia who showed good ability for the stable, sadly injured at only her second start. Served last spring by Fastnet Rock, she produced a colt by that champion stallion in mid-November.