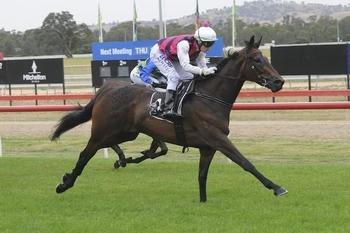 Thursday was a great day for the stable - three sets of happy owners cheering on winners with the third leg of our winning treble being the fast finishing The Terricks who was having his first run since last October.

Doing a bit of early work from a tricky outside gate, The Terricks nevertheless settled nicely for Mark Zahra who was not worried about sitting a little wide on the big spacious track that the new Pakenham is.

"He was always travelling well," Zahra reported, "and he finished off really nicely. He is a horse who has always been thereabouts and hopefully now he can put a few together."

"He will improve off that," stable representative Beth Schroen, adding that it was "a ten out of ten ride by Mark."

A son of Kapchat, the $12,000 2012 Melbourne Premier bargain bred by Ken Breese is a half-brother to the stakes placed Home Sweet from a strong Victorian family whose members include the stakes winners Berberia, Tindal, Chattanooga, Ascorbic, Fantisha and Real Stolle.