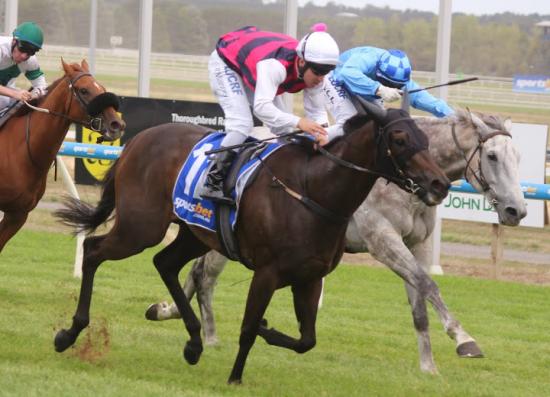 Teoflyte may not be big in stature but she is large in heart - as she showed with her gutsy performance to break her maiden at Ballarat on Tuesday.

Appreciating a rise in distance - stepping up to 2200m for the first time - the Teofilo three-year-old settled back in the small field, taking a while to wind up but really charging over the final stages.

Hitting the lead with 50m to go, Teoflyte showed plenty of courage over the final stages, knuckling down to win by 3/4 length with a fair bit in hand.

"She is not the biggest horse but she has just kept improving every start and today was the test to see it was worth having a go at the Tasmanian Oaks," said proud part-owner Ken Ardley.

His Prettymag syndicate, another member of which is John Eklund who was also on course to cheer Teoflyte home, has raced a number of nice horses with the stable - the best of whom is the stakes winner Prettyhappyaboutit.

"We have been with Robbie for about five years," Ken said, adding that the process of getting together with a few mates to buy a share here and there has been a most enjoyable one. And he is hoping for a quick double with another of their's, the promising Roman Fizz, set to race later in the week.

Bred by Hillside Parade Racing & Breeding, Teoflyte is a daughter of Galileo's dual Group One winning son Teofilo and the unraced Tale Of The Cat mare Oomaroo.