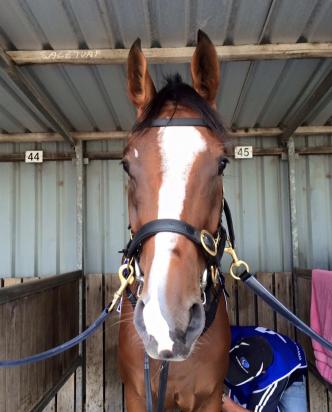 A horse who has improved with each outing, Song One was a gutsy winner of his maiden at Sale on Tuesday, finding the line in determined fashion despite having raced wide throughout.

Working the hardest of any of the 11-strong field, Song One took a while to wind up after such a tough run but he eventually wore down is rivals, putting his nose out where it mattered to win by a half head.

Having just his fourth start, the son of Not A Single Doubt was sent out favourite on the strength of a bold second at Ballarat at his previous outing.

"It was a great effort from a wide barrier," said stable representative Beth Schroen - "he came home strongly. He is still a little bit immature and we think he will mature into a nice stayer later on."

Jockey Ryan Maloney, who has been aboard Song One for each of his four outings, agreed - "he is still very green and he didn't have any favours today. But I was confident on his last run that he was the one to beat so I just kept him balanced and he did the rest."

"He just needs time and racing and I think he will stretch out to longer trips. At the moment the ability is there but the brain is not."

A home-bred for Limerick Lane Thorougbreds' Gerry Ryan, Song One is a half-brother to the stable's city winner It's One and a full brother to the three times Singapore winner What's Dat. His dam, the metropolitan winning Montjeu mare Numero Douze (daughter of the stakes winner Tristachine) was served last spring by Americain having produced a Helmet filly in late August.