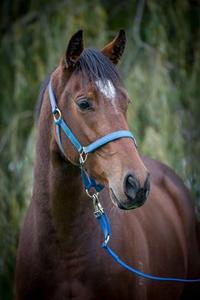 He's still green - but he is good! Quedoutes at just his second start saluted in impressive fashion at Ballarat on Thursday, proving 3/4 length too strong for his rivals despite not really knowing what he is doing.

Travelling nicely on the rails just behind the pace, the well related son of Redoute's Choice took a split with 300m to go but just took a few strides to really get going.

"He just didn't know how to get going," Jade Matthews said, "but once he did he was impressive!"

"He is still learning and hasn't quite worked out what to do when he hits the front but he is an up and coming horse."

Jockey Mark Zahra agreed - "once he hit the front he pricked his ears and wanted to relax."

"But he was still surging away from them and he will pick it all up pretty quickly."

Quedoutes' unraced dam Quibble is a Zabeel half-sister to the Gr.3 winner Majestically and the dam of the runaway Adelaide Cup winner Demerger. Super filly Triscay also hails from this prolific family.