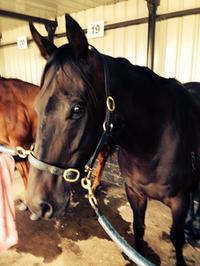 It has taken a little while to figure out Streetshavenoname but we seem to have found the key to the honest four-year-old now - he is purely a sprinter.

"We have tried to stretch him out a bit in the past but it just hasn't worked," Robbie Griffiths said, "so we will keep him to the short trips now."

And it was over such a distance - 1100m at Geelong on Friday - that the gelding was back to his best with a gutsy performance winning a 58 ratings event in smart fashion.

Settling down second last from the widest gate, Streetshavenoname was spotting his rivals five lengths approaching the turn but he really let down well over the final stages, nailing the leaders close to home.

"He did a really good job," Robbie said, noting that four-year-old appreciated a bit of sting out of the ground as he has done in the past.