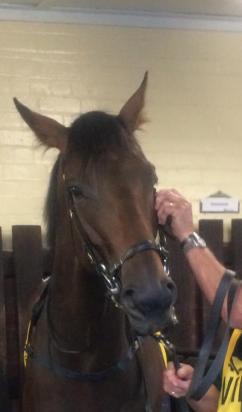 It was a particularly exciting victory recorded by Solar Duchess at Moonee Valley on Friday night, the tough sprinting mare settling well back as is her want and really charging in the run home.

Widest into the straight, conceding her rivals not only plenty of weight (she carried the considerable steadier of 61kg) but several lengths, Solar Duchess put in the big strides late, swamping her rivals close to the line.

In doing so recording the sixth success of her 22 start career, Solar Duchess continued her good form for Andrew Mallyon who has been aboard for four of her victories.

"She is not the easiest mare to ride," Mallyon said, "but she has been good to me. When she is on song she is always hard to beat."

Successful at three of her last five starts, Solar Duchess provided a pleasant surprise for Don Healy who admits to have been worried at the turn.

"I have to say that I didn't think she would make it but she did! It was a really good win and she has been a terrific mare for Dennis Malcolm and his partners."

Bred my Malcolm, Solar Duchess is a daughter of the Group One placed Desert Sun mare Solar Antiquity who was also a member of the stable. As is another of her daughters Felicette who won at Pakenham last month.