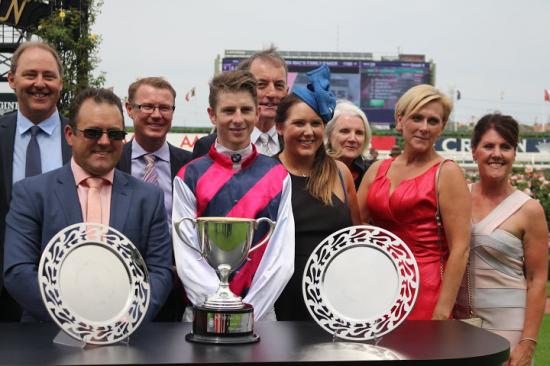 We have been enjoying a great run with our two-year-olds this season and that continued at Flemington on Saturday with Selenia a dominant winner of the Listed Festival Of Racing Stakes.

After tough fourths after making the pace in Blue Diamond Preludes at her first two outings, Selenia was able to take the sit this time, patiently steered by Jye McNeil who had her travelling nicely on the inside as the field split into two divisions down the straight.

Joining the leader with 400m to go, Selenia got clear over the final stages, saluting by half and length and looking to have a fair bit in hand.

"Today was the first time she has been able to get a bit of cover and not be left the sitting duck," McNeil reported, adding that the exciting filly has a bit more to learn.

"She still got a bit lost down the straight but she has come a long way since her first two starts and she was too good for them today."

Robbie was delighted by the victory - "she is a filly who has always shown a lot of promise at home and it was really good to see her win today."

"She had the chance today to take it a bit easier during the first half of the race and she was able to get away for a strong win."

"It may have been a blessing in disguise to have missed a run in the Blue Diamond," he continued, noting that the Mick Price colts were always going to be hard to beat.

"It has worked out well for us - she was not a dear filly but she is a well bred one and now she is a stakes winner."

One of seven two-year-olds who have raced well from just 18 yearling purchases last year, Selenia is a bargain $30,000 Easter graduate - selected by Robbie in conjunction with Peter Ford.

Bred by Jacob Park Thoroughbreds, Selenia is the first foal produced by the unraced Hussonet mare Lunar Lady. Served last spring by Zoustar having foaled a Medaglia D'Oro filly in October, she is out of the dual stakes winner Lunaspur - also dam of the Group winners Moonovermanhattan and Colorado Claire.

Selenia is a descendant of the influential matriarch Gondolette, third dam of the famed stallion Hyperion and ancestress of many a high class galloper including the champion stallion Sir Tristram and the Cox Plate heroes Might And Power and Fields Of Omagh.