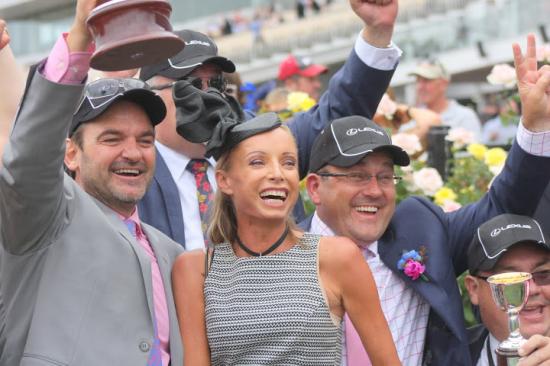 "To win a Group One anywhere would have been an absolute dream come true... but to do it at headquarters in the best sprint race in Australia is just amazing!"

So said Robbie in the midst of a sea of hugs, tears and kisses in the emotional aftermath of The Quarterback's fast finishing victory in the $1.25 million Group One Newmarket Handicap.

Going so close in several Group One racings during a highly successful training career that has spanned a quarter of a century, Robbie was - until Saturday - one of the few major Victorian trainers not to have secured a victory at the elite level.

"It has certainly been a long time coming!" he said. "We have been a top ten stable for so long but we just haven't had the luck on the big days."

Such was the desire to win a Group One that the Newmarket seemed to take much longer than the 1.09.23 seconds it took The Quarterback to cover the 1200m down the famous Flemington straight.

"The final seconds of the race seemed like 45 minutes!" Robbie joked.

Turning out The Quarterback in peak condition, Robbie admits to being confident before the race - "when I legged Craig on I said 'I reckon he can do it'."

"My instructions were just 'follow the grey horse and if you get past him you'll win.'"

"And Craig rode him perfectly."

It was a third Newmarket victory for Newitt and one of his favourite wins, the jockey thrilled to be part of history for the Griffiths stable - "if anyone deserves this it's Robbie," he said.

"The horse was outstanding," Newitt said. "He got smashed at the start but it didn’t matter as he was always going to get back. I followed Chautauqua into the race and he came off the bit well before I did. I knew I had a good run, he was out of tickets late but he did a good job."

Also thrilled was The Quarterback's managing part owner Craig Pearce who has been such a great supporter of the stable.

"This is for Robbie more than it is for anybody," he said, adding that "to be part of winning Robbie's first Group One is just the most amazing feeling of all time!"

A $120,000 yearling purchased at the 2012 Melbourne Premier, The Quarterback was part of a big day for breeder Rick Jamieson who cheered home his second Newmarket winner with Black Caviar so dominant in 2011.

Also part owner of the Hattori Hanzo who won Saturday's Gr.2 Phar Lap Stakes at Rosehill, Jamieson has supported us in the past and we are delighted to win a big one with a Gilgai graduate.

"I was so rapt that I could buy him," Robbie said, recalling that he had not long been out of hospital when Peter Ford recommended the chestnut to him - "he said 'you have got to buy this one, he is a really good horse.'"

Quite the understatement it seems, The Quarterback now a eight times winner of over $1.2 million in stakes.