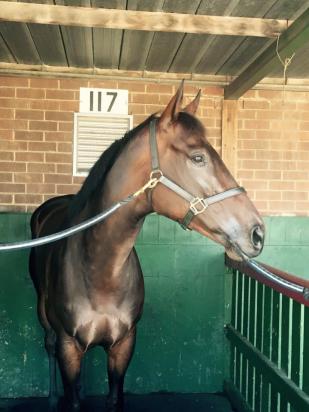 It was a deserved second metropolitan victory for Native Land on Wednesday, the talented but not always lucky mare digging deep to find the line in determined fashion.

Settling back in the small field for Mark Zahra, the five-year-old loomed up ominously in the straight before engaging in an exciting three horse war from the 200m to the finish.

Putting her nose out where it counts, Native Land recorded the fourth success of her 29 start career and it was a most timely one as she heads to the Inglis sales on Friday.

"Her win was no surprise," Robbie Griffiths said, noting that Damien Oliver had given her a wrap after her previous run at the same track.

"He said that it was a good run and that things just didn't pan out right for her but she would win her next start - and he was spot on!"

"She is a more talented mare than her strike rate suggests," Robbie continued, adding that her get back fashion of racing makes it tough for her.

"She has run some unbelievably good races but with her relaxed style means she gets out the back and often the races just aren't run to suit. But there is no denying her talent and this is her best track, it is her second win here."

Raced by a syndicate headed by her breeder Peter Ford, Native Land is a half-sister by the late War Pass to the stakes winner Backbone out of the Gr.3 winning At Talaq mare Fuss.