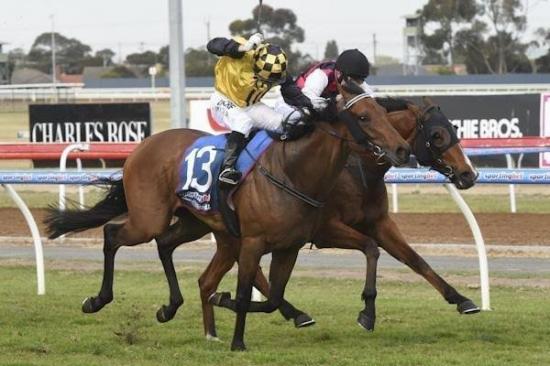 The considerable steadier of 61.5kg was not enough to stop Aurum Spirit finding the line at Pakenham on Thursday, the tough galloper strong to the line despite carrying 3.5kg more than the runner-up.

Getting back and enjoying a nice run along the rails, the Bel Esprit seven-year-old got into the clear half way down the straight, wearing the leaders down and getting clear from the 100m.

In doing so Aurum Spirit recorded his sixth victory, one that saw him increase his prize money tally to beyond $240,000.

"He has been racing in good form," in-form jockey Ryan Maloney reported, "and he won well under the big weight."

"He is a horse with ability and when things go right he shows a very good turn of foot."

"I was always confident today," he added, "I know what he can do when he gets a bit of room."

"It was great to see him win," Robbie Griffiths said.

"He is a consistent horse who always tries hard, he just needs things to go his way and this time they did."

We nearly pulled off a quinella in the race, Gilago finishing off strongly from the rear to grab third and it was a good day all round with King Deano in easy winning form at the Warrnambool meeting.