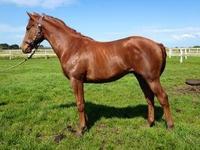 Appreciating a step up to 2000m, Another Martini was a strong and deserved maiden winner at Ararat on Monday.

Sent out favourite on the strength of an eye-catching and somewhat unlucky fourth over a mile at his previous start at Ballarat, the lightly raced three-year-old jumped fast for Ryan Maloney but was eased off an early speed battle.

Taking a nice position third and fourth on the rails, Another Martini travelled well throughout although coming to the turn needed luck as he has held up for runs.

A gap did come however and Another Martini was able to hook out from behind the leader straightening.

Whilst he gained momentum that leader kicked clear, looking the winner - but Another Martini really knuckled down over the final stages and was soft to the line.

He is the first foal produced by the unraced Lago Delight winner Cent de Lago, half-sister to the dam of Group One galloper Rubiscent.