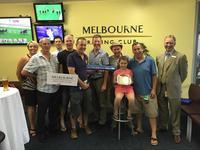 It was an overdue and much deserved win for Chile Express at Sandown on Saturday - the always tough and honest galloper in the winner's circle for the first time since a Flemington win in November 2013.

A horse who has remained consistent since that time - finishing in the placings on a frustrating seven occasions - Chile Express has often been the victim of his own get back style, his races needed to be run to suit.

And all went well for him at Sandown, a good ride from Nick Hall seeing Chile Express enjoy a good run closer up than usual and when a rails run presented itself he was keen to take it.

Taking on the favourite Decircles from the 100m, Chile Express showed plenty of heart drawing clear to a 3/4 length victory - the sixth of his 41 start career.

"He has been consistent," Reid Balfour said. "He normally beats himself but the way it panned out today it was beautiful for him."

"It was Nick's first ride on the horse and he seems to suit him, " he continued, adding that a lack of pace in races has been Chile Express' main problem - "he tends to over-race when there is not enough tempo which makes it hard for him."

Hall was impressed with the determination displayed by Chile Express - "he is the sort of horse who has to be switched off and get the right run and when he does he shows how good he is."

"He is a really genuine horse but obviously it can be a little bit tricky the way he races which is why he doesn't bob up as often as he should."

An NZ$80,000 Karaka graduate, Chile Express is a son of Thorn Park and the Volksraad mare Chile, a half-sister to the Oakleigh Plate winner Dantelah.