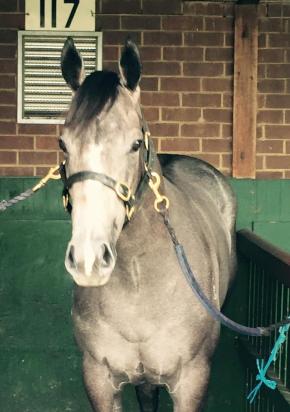 Odds-on favourite Motown Lil had no answer for our exciting debutant Ariaz at Sandown on Wednesday, the attractive grey filly letting go of a withering run to quickly gather up her rivals in the Toronado Plate.

And away she went once she hit the lead, dashing clear to salute by an impressive two lengths, her win not unexpected but much enjoyed!

"We are a bit surprised," Don Healy admitted. "She has worked well at home but there were so many first starters in the race so it was hard to know where we were in the pecking order."

"It was very nice win and it is always good to win for Gerry Ryan who has been such a great supporter of the stable."

Jockey Ryan Maloney, who did a good job steering the daughter of Charge Forward from a tricky outside gate, was excited.

"She was very impressive. She was a little bit slowly away but she got into a nice rhythm after 100m and when she cornered she gave me a really good feel. When I let her go she showed great acceleration."

"She still has a lot to learn," he continued - "there is a lot of improvement there and I can see her winning a lot better races than this."

A home-bred for Gerry Ryan's Limerick Lane Thoroughbreds who also bred and raced her multiple city winning dam Zaira, Ariaz is the first foal for that Fastnet Rock mare.