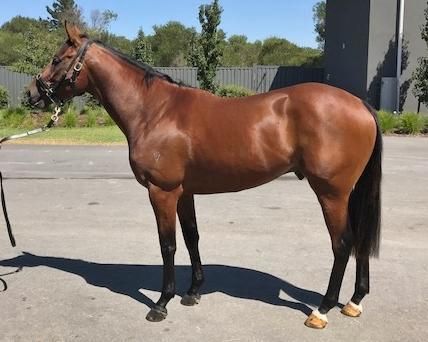 It was just start number two for Ohm’s Law at Bendigo on Saturday and for most of the race it looked most unlikely that he was going to improve much on his unplaced debut run at Geelong late last month.

An awkward start saw the still maturing three-year-old settle back in the field and in the run home he was green, copping a bump straightening and taking a while to gain momentum.

He looked to have the job ahead as the leader got a break on the field and it was not until the 100m that he really started to charge, and what an impressive charge it was – Ohm’s Law getting clear late to salute by half a length.

“He is still learning his trade,” Robbie said, noting that a step up from 1700m to 2200m suited the promising staying type.

“He benefitted from that debut run under his belt and stuck to his task well aided by a great ride by Martin Seidl.”

So much of a young horse’s race day education is at the hands of a jockey and Seidl has such good hands – in his short time in Australia impressing us by the way he gets the best out of his charges.

Providing the stable and Australian Thoroughbred Bloodstock with a running double, the cleverly named Ohm’s Law (a law that states that the current through a conductor between two points is directly proportional to the voltage across the two points… yes we had to google that!) is by the lightly raced but very well bred maiden winner Man Of Power – a New Zealand based son of Redoute’s Choice and the four times Group One winning mare Mannerism, also dam of the Group winners Dandify and Manner Hill.

His dam is the unraced Danasinga mare Dansingonwaves whose dam Atalantis is a full sister to the dual Group One winning stayer Electronic, grandam of The Galaxy winner Sweet Idea.