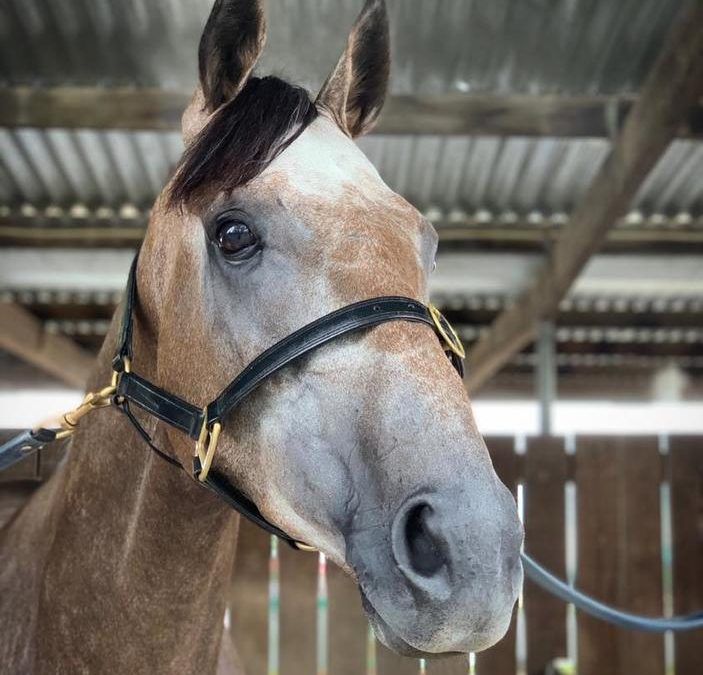 It was an overdue maiden victory for Grand Symphony but worth the wait for connections as the three-year-old proved too tough on pace over 1200m at Echuca on Sunday.

Having his first run since last spring, the talented grey did not have the easiest of runs sitting outside the leader but he showed good heart wearing that horse down over the final stages.

“He jumped well and travelled well,” jockey Matthew Allen reported, noting that the three-year-old still has a bit to learn – “he got his head up and half waited for them, he still doesn’t quite know how to get the job done… but it was a good performance.”

And all the better for Allen with the win coming on the jockey’s birthday!

There was an air of confidence in the stable leading into Grand Symphony’s success – “he had trialled and worked really well,” Beth Schoen said, adding that “he has had a fair bit of bad luck during his career.”

“It is great to see him back and hopefully he can have a good preparation. He is physically more mature his time in and is acting more professionally.”

A horse who has always shown good ability, Grand Symphony was stakes placed at debut at at only his second outing took on the big guns of his age in the Blue Diamond Stakes won by Written By.

A son of the free-wheeling imported Mackinnon Stakes winner Glass Harmonium, Grand Symphony was bred by R & C Legh Racing who shared in the ownership of that Blue Gum Farm based stallion.

Grand Symphony’s dam is the unraced Danzero mare Frolicking Miss whose four to race have all been winners including the Singapore Gr.3 winner Conflight. Served last spring by Tivaci having produced a filly by that same stallion in October, she hails from the family of the feature race winner Happy Zero (Hong Kong), Cossack Warrior and Cossack Prince.