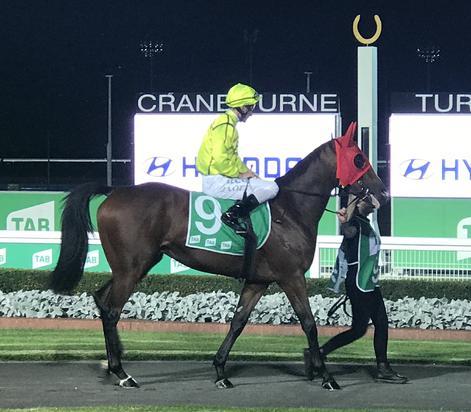 Three wide on pace is hardly the ideal but once Whitemore jumped so well in the 1200m BM58 contest at Bairnsdale on Sunday – the two leaders kicking up inside him – jockey Brian Higgins had little choice but to sit there.

It was a smart decision, Whitemore whilst covering ground able to get into a good rhythm whereas dragging him back or pushing him forward may have seen him have to work all the harder!

And all’s well that end’s well with Whitemore cruising up to his rivals turning, having a bit of a fight on his hands as Cyclone Tim gave a kick – but over the final stages he was able to get the upper hand, his winning margin a soft 3/4 length.

It was a second win in a row for the promising three-year-old who was an odds-on favourite on the back of a tough maiden victory at Pakenham at his previous outing.

“He was terrific making it back to back wins,” Robbie said.

“He was the best horse in the race and although it wasn’t pretty he got the job done and the confidence of winning two in a row will certainly continue to help him moving forward.”

A graduate of the Tasmanian Magic Millions raced by Australian Thoroughbred Bloodstock, Whitemore hails from a consistent Tasmanian family and is named after the home town of his breeders, the Schuuring family.