RACE THIS STUNNING FILLY WITH US!

Robbie has, over the years, enjoyed a lot of success with the progeny of mares he trained and he is delighted to add to the stable a regally bred daughter of the tough city winner Magnagem.

Really catching the eye at this year’s Inglis Melbourne Premier yearling sale, she is a by one of the country’s hottest young stallions, the five times Group One winner Pierro who is doing such a great job at stud.

As he did on the track, winning 11 of his 14 starts including the juvenile Triple Crown – the Golden Slipper, the Champagne Stakes and the Sires’ Produce Stakes… later adding to his impressive resume the Canterbury Stakes and the George Ryder Stakes.

Never out of the placings, the winner of over $4.5 million in stakes split All Too Hard and Epaulette in a memorable Caulfield Guineas before a gallant third in Ocean Park’s W.S Cox Plate.

With stakes winners in Australia, New Zealand, South Africa and Hong Kong, Pierro boasts progeny earnings in excess of $46.5 million and his progeny are not only classy but versatile – his stakes winners successful over a variety of distances ranging from 1000m to 2800m.

All studies show that city winning mares make good broodmares and Magnagem has all the qualities to succeed, having not only talent but speed and heart… winning four of her 15 starts over sprinting trips including a 1000m contest at Sandown.

Magnagem is a daughter of one of the stable’s favourite stallions, the Group One sprinter Magnus (we have trained 22 individual winners by him!), consistent sire of 22 stakes winners and already doing a great job as a broodmare sire with 19 of the first 32 runners out of his daughters being winners… including the three times Group winner Mizzy and the Listed winner Unite And Conquer.

Magnagem’s dam is the terrific race mare Coniston Gem, winner of nine of her 14 starts (unplaced only twice) including the Frances Tressady Stakes and the Geoffrey Belmaine Stakes – both at Group Three level.

Also dam of the Group Two winning stallion Gold Standard, Coniston Gem is one of nine winners (from nine foals) for the dual city winner No Telling, in turn daughter of the stakes placed Secret Message from the family of the fast stakes winners Rapid Man and Solar Princess.

One of the most exciting aspects of this filly’s pedigree is a 5 X 5 cross of the wonderful My Tricia, one of New Zealand’s greatest broodmare influences. The third dam of Lonhro and the dam of Grosvenor (grandsire of Magnagem’s dam Coniston Gem), she appears duplicated in the pedigrees of such classy gallopers as Mecir, Eight Till Late, Aquinas, Diva Express and On Point.

Pierro is faring particularly well with a My Tricia cross – five winners from seven runners so far; including the promising stakes placed Rocha Clock who has other pedigree similarities with this filly – her dam sire Encosta de Lago being closely related to Magnus’ sire Flying Spur.

And what a great job Pierro is doing with Flying Spur mares – 11 winners from 15 runners; a 73.3% strike rate even more impressive than Pierro’s overall record. And amongst those winners is Pierro’s highest stakes winner – the Group One galloper Pierata – as well as the Gimcrack Stakes winner Satin Slipper and four other metropolitan winners.

And so there is great depth to this filly’s pedigree, noting also that she boasts duplications of the influential stallions Sir Tristram, Sir Ivor, Mr Prospector, Never Bend and Mill Reef – as well as background duplications of the prolific mares Matelda, Sweet Lavender, Chelandry, Natalma, Mumtaz Begum, Frizette, Overture, Sunshot and Orlass. 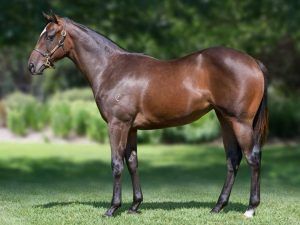