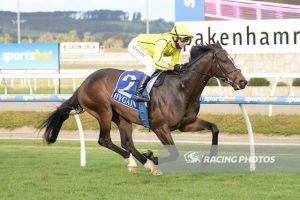 “But Hasseltoff is coming!” declared caller Adam Olszanski as our exciting four-year-old charged to the line to break his maiden in impressive fashion at Pakenham on Thursday night.

Settling beautifully a bit worse than midfield for Michael Rodd, the son of Toorak Toff had some chasing to do straightening with the leader Mighty Feat having given a good kick turning.

But chase he did, showing heart and talent as he raced away to a 1 1/4 length victory.

A gutsy third when striking very heavy going when resuming, Hasseltoff was a short priced favourite at Pakenham with his good debut campaign form in everyone’s mind.

“He is a horse with a lot of ability,” said the stable’s Jade Matthews – “he showed that last preparation.”

“He is only going to improve and he is definitely a city class horse in the making.”

A home-bred for Australian Thoroughbred Bloodstock, Hasseltoff is the only foal produced by the winning Flying Spur mare Hoop who sadly died young. Her half-brother is the Macau Group One winner Sacred Hustler whilst her dam Hula Here is a full sister to the stakes winner Willy Jimmy and a half-sister to the Group Three mare Sugar Bella.

Hula Here’s dam is the wonderful Hula Wonder, the dual Group Three winner trained at Wangaratta by the late Roger Hoysted who also prepared Hasseltoff’s classy fourth dam Natural Wonder who won 12 races including five in a row over the winter and spring of 1990, the final three of those being stakes races.