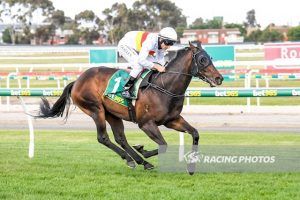 Thanks to a great ride by Matthew Allen, a slow start proved no disadvantage for Rutherford in the BM58 1125m contest at Geelong on Sunday, the five-year-old able to save so much ground along the rails that he was in a winning position from before the turn.

Cruising into the straight, Rutherford was in front by the 250m and away he went – quickly putting 2 1/2 lengths on his rivals despite carrying more weight (62kg) than any of them.

It was win number two from just 11 starts for the Foxwedge gelding who was having his first start since mid-April.

“It was a terrific first up win,” Robbie said. “Although slowly away Matthew gave him a peach of a ride to weave his way up on the inside and save his energy for the straight.”

“He was a little disappointing towards the end of last preparation but has always shown he has talent so gelding him has obviously worked a treat.”

Raced by a happy group led by his breeder Kevan Wacey, Rutherford is a half-brother to the dual Group Three winner Defcon out of the multiple city winning Encosta de Lago mare Nuclear Force.

This has been a terrific Victorian family, one that has also produced the VRC Oaks winner Rom’s Stiletto and the two times Group Three winner New Smyrna.