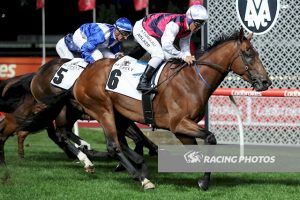 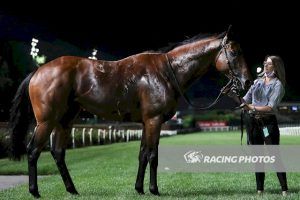 At one stage during the running of the BM64 2040m contest at Moonee Valley on Friday night Our Chevalier was not only last, but a clear last – spotting his nearest rival several lengths.

But those watching remained confident with the talented four-year-old appearing to be cruising under the guidance of Michael Walker. And he started to get going in plenty of time – a quick move seeing Our Chevalier go from last to third by the home turn.

Getting clear from the 100m, the bay impressed recording his second win in a row having dominated at Cranbourne at his previous outing in late October.

Fresh and up 2kg from that success, Our Chevalier did a great job recording the third success of a 12 start career that has also seen him in the placings on five occasions.

“That was an awesome victory,” said an excited Mathew de Kock as the new training partnership took its strike rate to an impressive 36%.

“The horse has previously raced on pace but there was a lot of speed in tonight’s race so we wanted him to relax and settle, he is a horse who really loves to get comfortable in the run.”

“He had a couple of weeks at Lauriston since his last run and you can see the good it did him, he is looking great.”

New owners were only just added into the group who race Our Chevalier, a couple of shares sold online – a great and quick return!

“That was two rides for two wins on him,” Michael Walker said, taking great satisfaction from the success as he noted that “he is not an easy horse to ride.”

“I had to have both hands on the inside rein for much of the race as he kept trying to run to the outside fence. He did not get onto his right leg until we went past the Tabaret but from there he really travelled from me – and he won easily, he was very strong through the line.”

Our Chevalier was the second leg of a winning double for the stable with Influential Girl so impressive earlier in the evening.