Boss Proves A Class Above 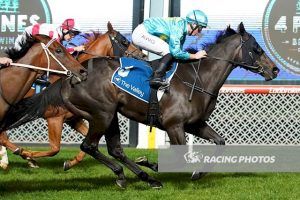 She was a short priced favourite and she won like one, Don’Ttelltheboss proving a class above her rivals in the BM64 1200m contest at Moonee Valley last Friday night.

Having her first run since mid-May, the stakes placed Street Boss four-year-old had been competitive in stronger races last time in and on the strength of her first up win she looks set for a big campaign.

Given time to find her feet by VRC Derby winning jockey Lachlan King who was having his first ride on the mare, Don’Ttelltheboss settled well at the rear – edging closer from the 600m.

Approaching the turn she was right in striking distance, four wide fanning and in for the chase – wearing down her rivals and drawing clear to late to win by a soft 3/4 length.

“Robbie instilled me with a lot of confidence,” King said.

“He said to ride her negative and take bad luck out of the equation. That’s how I rode her and she did the rest.”

“I was lucky enough,” he added, “that I could slide up without being forced too wide. I was onto them at the corner and she was strong to the line.”

Describing Don’Ttelltheboss as “progressive,” King said that “she should go through her grades pretty easily.”

“She was terrific winning first up,” Robbie said. “She has always shown at home that she has the talent to be competitive but due to various factors – mainly bad luck in running – she was unable to show this last preparation.”

“She has come back in terrific order and Lachie rode her perfectly, it was so great to see her win. That should give her a big confidence boost.”

A home-bred for Robbie and Shiranee, and raced with a big group of great stable clients, Don’Ttelltheboss is out of the raced winning Haradasun mare Canterbury Hill who was also a member the stable.

Also dam of the winner Madam St Clair, Canterbury Hill – a Seymour winner over 1200m – produced a Toronado colt in August and has nice types by Nostradamus and Cable Bay coming through.

Canterbury Hill’s Gr.1 placed (she was second to Anamato in the Australasian Oaks at Morphettville) dam Cancanelle was also trained by Robbie but sadly that multiple city winner died young, producing only one other foal – the two times winner Dancing Rose.

Other members of this family, one which descends for the legendary broodmare Teppo, include the tough stakes winners Elite Elle and Rich Habit (Don’Ttelltheboss’ Talindert Stakes winning fourth dam) as well as the stable’s Gr.3 placed multiple city winner Gail.