A Fighting Win For La Pietra 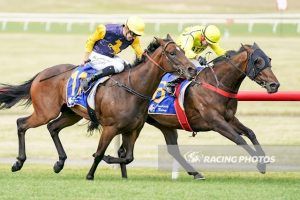 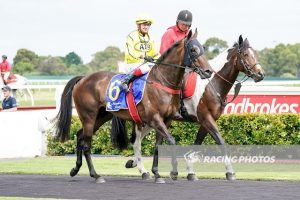 There look to be exciting times ahead for the talented La Pietra who was so game emerging victorious from a two horse war in the Class 1 1300m event at Sandown last Wednesday.

It was no mean feat to come back from a 1600m run; hence the nice odds on offer, but the lightly raced four-year-old showed just what she is made of recording her second success from her last three starts.

“She was very good winning here at Hillside in late November but she pulled up very sore in the hamstrings from the Moonee Valley run,” Robbie explained, adding that “she was coming back in distance by default.”

“Credit to our physio and chiro team, they did a great job working on her and Dean (Yendall) gave her a great ride.”

It was the stable’s first experience with Sandown’s new cutaway rail and it was certainly of benefit as La Pietra was headed by the runner-up only to be able to fight back on the fence.

“Mat said that is what they do in South Africa,” Robbie said.

“She was on the path to be tried over a longer journey but we were really happy with how she galloped on Saturday morning so we came here with a bit of optimism. We do think she can improve over more ground though so it was nice to see her win today.”

“She gave me a good push when I asked for it,” Dean Yendall said, happy throughout the running. “It was a good, genuine tempo though the horse next to her was swishing her tail and I was wondering if my girl would react to it – but she was good, she travelled well and the cutaway was a bit of a godsend today… and she really chewed up the line late.”

A well related daughter of the terrific young stallion Pierro, La Pietra was secured at the 2018 Inglis Melbourne Premier Yearling Sale. Bred by Hillside Parade Racing, she is out of the imported Danehill Dancer mare Classic Music, daughter of the UK sprinting star Pipalong.

Classic Music is doing a great job at stud, La Pietra one of her three metropolitan winners with Tenorino and Classic Diva also faring well in good company whilst the lightly raced winner Chaminade is city placed.