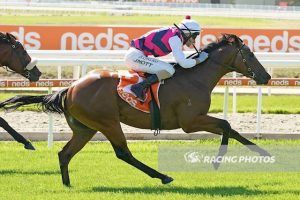 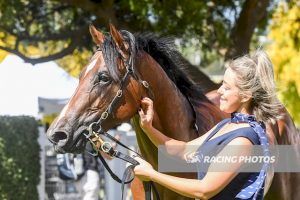 A trip to Sydney to chase Group One glory beckons for Daily Bugle who was so impressive winning last weekend’s $125,000 Mornington Sires at just his fourth start.

Catching the eye with his Pakenham debut victory in late January, the cleverly named son of Press Statement was second to the classy Lightsaber next time out – not having the best of runs from a wide gate in the Gr.2 VRC Sires Produce Stakes before heading to Mornington.

Enjoying a good run against just five rivals, Daily Bugle began to gather them up from before the turn and he was strong passing them in the run home – drawing clear to win by 1 1/4 lengths with plenty in hand.

“He has always shown ability,” jockey Jamie Mott (who was happy having just ridden his 60th Victorian winner for the season), “and he just had to be ridden a bit quietly from a wide gate last time – and it didn’t work out for him.”

“But today in a small field we could be within striking distance and he won well. He is a really nice horse and there is still a lot of improvement to come.”

“We were a bit despondent after the Flemington run,” Mathew de Kock admitted, “but we never lost faith in the horse, he was just never in the right placed that day.”

Fortunately Mornington was a much better watch… “he has got a very good sprint and I knew turning for home that he was a good chance.”

With the Sydney carnival back a week, there is more time for Daily Bugle to prepare for such targets as the Champagne Stakes and the ATC Sires Produce.

Also dam of the Gr.3 Norman Robinson Stakes winner Thought Of That, the half-sister to the Listed winning 2Y0 How Funny has made a great start to her stud career and has youngsters coming through by Spirit Of Boom and So You Think.

Hailing from the family of the outstanding stallion Without Fear, Daily Bugle can also boast amongst his relations the stakes winners Jester’s Girl, Assimilate, Smart Win and Twining (his Gr.2 Breeders Plate winning third dam).