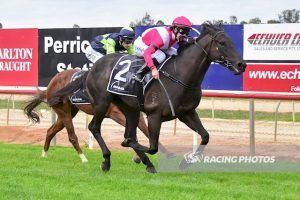 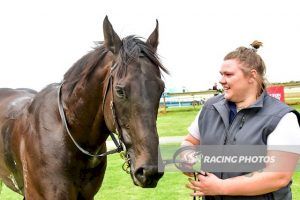 What great form The Running Man is in, the tough and determined five-year-old at Echuca on Monday recording his second success from his last three starts.

Sitting outside the leader and favourite Nevershotthedeputy, The Running Man always looked to have the better of him and, after joining the lead with 200m to go, he was able to get clear to record a comfortable 1 1/4 length victory.

“He flew out of the gates and wanted to put himself on the speed,” reported jockey Carleen Hefel back from a successful stint in Western Australia.

“I could see that he was travelling a little bit better than Jamie (Mott)’s horse so I was pretty confident and he got away nicely at the end.”

The stable’s Reid Balfour was happy to see The Running Man “put them away in the straight… it was fantastic.”

“Dropping back in grade helped and I think he had a bit of help from above,” he said, noting that Carleen was wearing a black armband in tribute to the mother of Neil Jennings, close friend to Robbie and Shiranee.

The winner of four of his 21 starts, amassing just short of $100,000 in stakes, The Running Man was bred by Gerry Harvey. He is a son of the outstanding stallion Zoustar and the lightly raced, placed More Than Ready mare Please Leave whose dam is the stakes winner Shovoff, in turn daughter of the five times Group winner Startling Lass whose full sister Midnight Fever won the Blue Diamond Stakes.