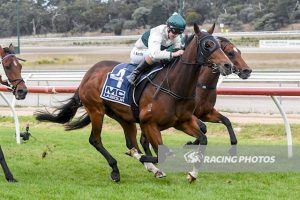 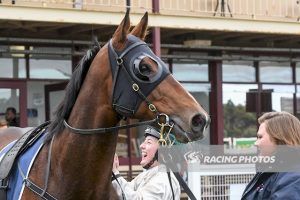 Riverdance Lad is one of those horses that all trainers love, a stable stalwart who just keeps racing well, just keeps giving – winning one or two races each time he is in work.

And at Kilmore on Thursday he was in the winner’s circle for the second time this campaign, finding the line well in the BM58 contest over 1200m.

Travelling beautifully along the rails behind the leaders for Alana Kelly, the seven-year-old was into the clear straightening and strong to the line – hitting the lead with 100m to go and getting clear to win by a length.

It was win number seven for the bay whose next start will be his 50th. Along the way he has amassed in excess of $196,000 for his happy owners R Hennessy, N Osborne, M Buys and B McGahan.

“It is fantastic for his ownership group,” Robbie enthused, noting that Riverdance Lad “had been knocking at the door… but a few things have prevented it from opening!”

“Alana rode a perfect race sitting just behind the leader and once he got clear running the race was over.”

Riverdance Lad is by Redoute’s Choice’s Gr.1 TJ Smith Stakes winner Master Of Design and he is the first foal for the lightly raced Golden Snake mare Waltzing Lily who was served last spring by National Defense having produced a Magnus filly in late September.

A half-sister to the durable 11 times winning stakes placed Diggersanddealers, Waltzing Lily hails from the same family as the Gr.1 gallopers Burst, Victory Prince and Frances along with fellow stakes winners Inspire, Our Joan Of Arc, Worth, Artist Man, Wilful, Restive, Promise and Windsor Lad.