RUNNING ON AND ON! 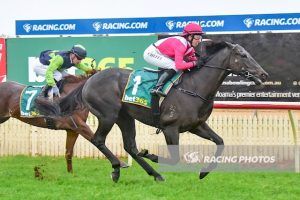 It was a stirring two horse battle in the straight in the 1009m BM58 contest at Echuca on Monday, made all the more exciting for us with The Running Man getting the upper-hand late before drawing clear to win by a smart length.

It was win number five from just 22 starts for the in-form galloper who has been successful at three of his last four starts – much to the joy of his connections, all of whom have been terrific stable clients.

“He is such a tough horse. He had a similar run to the start before and got the job done again.”

“It was great to see The Running Man put another win on the board,” Robbie said.

” With a great ride by Carleen Hefel, although up in weight he was still too strong for his opponents. Congratulations to his connections!”

Bred by Gerry Harvey, The Running Man – cleverly named after a Stephen King novel/movie – is out of the More Than Ready mare Please Leave whose dam is the stakes winner Shovoff, in turn daughter of the five times Group winner Startling Lass whose full sister Midnight Fever won the Blue Diamond Stakes.