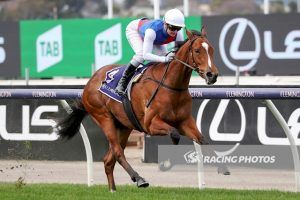 Group One plans are months in the making and hopefully the stable’s aims with exciting filly Gonnadancealot come to fruition on the back of her runaway victory in the Byerley Handicap at Flemington Saturday.

The 1800m contest carries a ballot exemption for the VRC Oaks and how lovely that race would look on her resume!

Of course there is still a long way to go but so far Gonnadancealot has done everything right, not only improving at each start but with each passing week at home.

“Each week her riders tell us she has never felt better,” said a delighted Mathew de Kock who noted that “we have had this race mapped out for her for a few months and programmed her towards it.”

“We had the Oaks in the back of our mind leading into today, we just wanted to see a performance good enough to make it warrant consideration.” 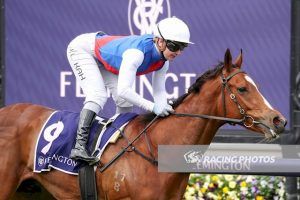 And it was such a performance with Gonnadancealot always travelling well off a quick beginning – sitting outside the leader and taking over early in the straight; from the 300m getting clear to win by a soft 2 3/4 lengths.

Well steered by the in-form Jamie Kah, Gonnadancealot impressed her jockey who noted that “she really hit the line straight.”

It was start number four for the promising bay who was last at debut, fifth second up and runner-up third up – the sort of improvement you hope all your horses show from run to run! 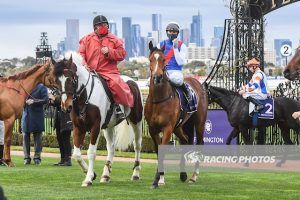 A bargain $30,000 graduate of the 2020 Perth Magic Millions Yearling sale (purchased by her owners Jane Chapple-Hyam and Eimear Donnelly), Gonnadancealot hails from the southern hemisphere debut crop of the Gr.2 winning speedster Sir Prancealot who shuttles to Cornerstone Stud in South Australia.

Gonnadancealot is the third winner produced by the city winning Danehill mare Tresillian, also dam of the stakes placed metropolitan winner Topaque and the six times winner Turn Of Faith.

Served last spring by All American, Tresillian is out of the stakes placed Rory’s Jester mare Tregurrian, dam of the New Zealand Listed winner Minstrel Court.

This is a family that has been producing classy performers for generations with its ancestress Black Ray also boasting amongst her descendants the likes of Mill Reef, Blushing Groom and Red Anchor.

We are thrilled to enjoy success with Jane Chapple-Hyam, long time associate and friend of the de Kock family. And hopefully this is just the start of a successful partnership with Griffiths de Kock Racing.

Jane was happily watching from Newmarket, sharing the excitement with her sister Ann “flicking video texts” and cheering on.

“We really liked her pedigree page,” she said, “especially with her dam sire being Danehill – and we felt that Sir Prancealot is a stallion who you like to have represented in your stable. Plus the way she walked was a good look… fingers crossed for the future.”